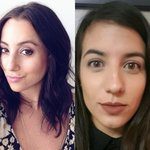 Nata PR [TCO] has announced more expansion to their team in Toronto with the addition of two new members.

Vanessa Bower has been hired as a Senior Account Manager and will focus on a number of areas for the agency such as public relations and social media execution for NATA clients such as AGROPUR and Puressentiel.  Amanda Zeidenberg joins the agency as a Coordinator.