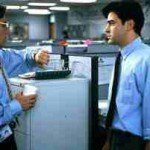 Looks like the office space over at Edelman Canada [Marketplace Listing] is going through a major shift right now.  We have heard from several sources that a number of senior changes have taken place at various offices within Edelman Canada, and it looks like it is a combination of exits and layoffs.

Update: We reached out to several senior people at Edelman to verify the rumours and they opted not to comment, but it looks like the rumours are in fact true and Edelman Canada is having a shake up at the senior level.

Update: It has been two months since we wrote the original story, and Edelman has still failed to communicate any changes with the organization.