There Is A Digital Divide Hitting The PR Industry 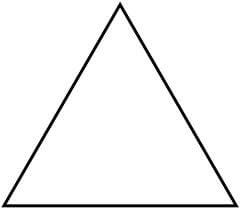 Pictured to the left is a simple triangle, a shape that we all learned in elementary school, but its impact on the business world today can make or break a public relation’s agency. Continue to picture with us the following scenario, at the top of the triangle is the brand (client), in the left corner is an advertising agency, and in the right corner is your public relations agency. The client invites both vendors to the table, shares their campaign brief which is derived from a business goal or objective they are trying to reach. For example, “We want a campaign with xx character/ celebrity/ spokesperson who will talk about how great our product is, we want it to go viral, and store shelves to be sold out” (well, the conversation goes something like that).

Traditionally the budget for a campaign has had the majority going to the advertising agency, who creates an out-of-home, print, radio and/or television campaign, and this is supported with pr efforts by the public relations agency. All of a sudden digital started to take off, consumers were flocking to www.something to engage, interact and ultimately buy a product or service. Fast forward a few more years and the social media train rolled in as MySpace, Second Life, Facebook, Twitter, YouTube dominated the attention of consumers at one point in time. Public relations agencies started to feel the budget pinch and quickly fought for a bigger piece of the budget, but based on what value? The war for “digital dollars” that started to unfold, as advertising agencies competed against public relations agencies in the “squared ring” which we’re referring to as the Digital Divide. The world has often referred to the Digital Divide related to education and those that could vs not afford to have computers and access to them to further their education, but there is also a battle in the “triangle ring.”

Over the last three years we have seen a number of agencies launch digital division within the public relations agencies, and recruiting talent from advertising agencies, and in some cases it has helped to bring on new business and additional revenue. Is it enough? No! Overall, by running both Profectio and PR In Canada we have a pretty good handle on what is and is not happening with brands and agencies across Canada, and have noticed a few trends.  There are still significant budget dollars being allocated to advertising agencies versus public relations agencies. Having recently completed our first annual #top30under30 (we will have the results ready for you next week) gave us a good chance to dissect the Canadian public relations agencies and there are quite a few factors that are preventing it from growing, and it does not seem to be advancing at the rate the advertising industry is advancing.

So what’s it going to take? Part of the answer is there needs to be a stronger commitment from YOU (yes you), your co-workers, staff and peers. At a very basic level, there needs to be more of a commitment and investment from public relations agencies to educate staff members on how digital can help brands to communicate their message better. There are a number of events, seminars, conferences that are dedicated to digital communications or have an aspect to help teach about the digital world that you could be attending.

Get over the hang up on terms, at some level social media is simply communicating a message faster due to the fact that we’re now using a digital channel. Isn’t that what pen and paper does? Isn’t that what we did as kids when we tied two cans together with a piece of string while playing in the backyard?

The problem for the PR industry is one of failing to deliver value – it has been for as long as I’ve worked in the industry and will continue to be as long as agencies continue to chase a larger slice of the budget without fixing the value problem. To date, the industry has stuck its fingers in its ears and continued to complain about how poor it is compared to advertising and digital marketing – and this has to change.

It’s amazing that traditional agencies can continue to command the retainers they do, given the majority of people don’t appear to understand the fundamental role of PR. Nor do they understand its role in the wider communications mix.

PR is about building and maintaining relationships. Marketing is about getting people to take action on your behalf. Publicity [what most agencies sell under the guise of PR] is about awareness. It’s about communicating information without either attempting to build or maintain a relationship or to get the audience to take action.

Until these two things are fixed and the industry is able to demonstrate that the reason their marketing and publicity [and sales] activity isn’t working as well as it might because the customer hasn’t built or doesn’t maintain the relationships it needs, then this problem will continue to exist. Alternatively, the industry will get disrupted and traditional agencies will just lose their fight for relevance.