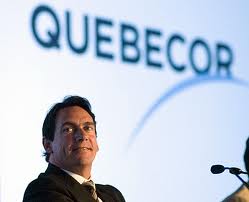 Quebecor reported their third quarter earnings for 2012 earlier this morning with mixed results as profits were down and revenue rose for the quarter.  Quebecor also announced that it will slash 500 jobs in Sun Media, a division of the communications company, as well they will shut down two of its publishing facilities in Kingston and Ottawa as part of a restructuring effort.

“The Corporation continued its growth in the third quarter of 2012 despite a fiercely competitive business environment in most of its lines of business,” said Pierre Karl Péladeau, President and Chief Executive Officer of Quebecor. “It increased its revenues by 4.4%, its operating income by 10.4% and its adjusted income from continuing operations by 30.2%, confirming the profitability of the major investments made in recent years.”

Paul Morse, Head of the southern Ontario Newsmedia Guild was quoted in the Montreal Gazette as saying:

“Clearly, this is a blow to journalism in Canada,” said Paul Morse, head of the southern Ontario Newsmedia Guild, which represents some of Sun Media’s employees.

“The erosion of these kinds of jobs is significant problem for newspapers that are going to be dealing with trying to put out quality journalism with workforces that are clearly stretched beyond the limit.

“This is a terrible day for journalism in Canada.”