Mayor Rob Ford Says, “Toronto Do No Read The Star,” Is He Abusing The Job? 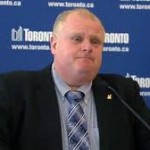 Since taking office last year in Canada’s largest city, Toronto’s Mayor Rob Ford has had his scare of public battles. The latest has Rob Ford taking on The Toronto Star, Canada’s largest newspaper.  He has actually gone on record and told “not to read The Star,” “If people want to read a paper, pick up the Globe, Post, or Sun,” he said. This is pretty rare to see someone in a role that is often dependent on the support and unbiased coverage from the media to take such a hard stance. He has also implemented a block on any press releases regarding the City of Toronto to be issued to The Star, this of course does not seem to be slowing them down from talk about the city and city business.

Late last night we also reported about a hack that occurred on Rob Ford’s personal website, needless to say this is an embarrassment for Team Ford.
As communications professions there are a few things to consider here.

1. When your client has an issue with the media, what is the best way to handle the issue?
2. Is there ever a case where taking on the media head on is appropriate?
3. Is Mayor Rob Ford abusing his power by telling citizens of Toronto to boycott The Toronto Star?

3 Ways PR Can Improve How They Work With Media