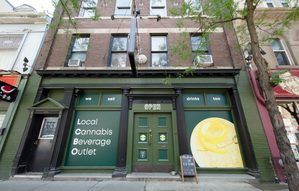 Cannabis-infused beverages producer, Truss Beverage has rolled out its latest campaign –  Local Cannabis Beverage Outlet. The campaign features a two-day storefront takeover of Miss Jones Cannabis – Osgoode Outpost to draw attention to the challenges cannabis retailers are facing.  This also highest how  LCBO is no longer the only game in town for  legal-age consumers to get their beverages this summer.

More cannabis retailers are adding cannabis-infused beverages to their shelves in a neighbourhood near you; and sometimes a few doors from an LCBO.

Scott Cooper, CEO of Truss Beverage Co., said: “As we look ahead to the third anniversary of cannabis legalization in October, now is the time to reexamine the environment and ensure the right regulations are in place to allow the industry to thrive. Cannabis retailers create a safe space for Canadians to explore cannabis responsibly, playing a positive role in the community and contributing to the local economy. We believe there’s an important discussion to be had to ensure they don’t get left behind.”

With the summer here, Canadians will be looking to take advantage of the season to consume adult beverages. As retail starts to fully reopen, Truss is encouraging consumers to consider their local cannabis retailer as a ‘Local Cannabis Beverage Outlet’ and head instore to learn about the options available to them. Cannabis retailers across Canada are also joining the campaign, placing stickers and signage in their windows, stating: “drinks sold here.”

Cannabis brands are still heavily regulated by governments limiting product marketing and retail promotion,  this pop-up is a smart way to integrate the brand directly with consumers.

Olympian Christine Sinclair Joins A&W Canada For 13th Annual Burgers To Beat MS DayJuly 28, 2021
AriZona Hard Has A Sweet Summer Ride For YouJuly 12, 2021
Smarties Unwraps A Sweet Package On World Chocolate DayJuly 7, 2021
Are You The Next Top Avochef? Avocados From Mexico Contest Now OpenJuly 7, 2021
Toronto, Are You Ready For Your Heineken Fresh LooksJuly 7, 2021