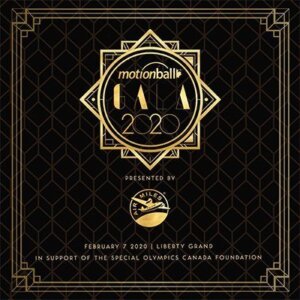 On Friday, February 7, the 19th annual motionball Toronto Gala took place and drew over 2,000 attendees including celebrities, young professionals. Most importantly, some of the Special Olympics athletes were also in attendance, after all they are the reason for the night.  For 2020, 0ver $300,000 was raised for the Special Olympics Canada Foundation.

This year the theme was the roaring ‘20s with attendees encouraged to wear their best Gatsby-glam.  Special Olympics supporter Tessa Virtue kicked off the night from the main stage with gala host, CityTV’s Devo Brown, to excite the intimate VIP reception crowd by announcing a pledge drive where she would match every donation — raising $30,000 in a matter of minutes.

Family Feud Canada host Gerry Dee hopped on stage, opening up a family spot on his show this season for a donation to the cause. His own impromptu move raised another $10,000! Karl Wolf and Brenda Mullen quieted the crowd with their Kobe Bryant tribute “After All” and brought them back to their feet with “Africa” before opening the doors to the main event.

Late-night bites were provided by national sponsor Pita Pit, and a luxury silent auction and chance to win round-trip Air Canada flights anywhere in the world meant that many guests went home with more than great memories and stellar photos. The highlight of the night for attendees was the chance for supporters to meet the true celebrities of the event, the Special Olympics athletes.

Latest Communications & Public Relations Jobs From PR In Canada, May 17, 2021