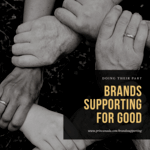 COVID-19 continues to have an impact on all aspects of our daily lives, there have been so many stories about people doing their part to help, but PR In Canada wanted to share some stories about Brands Supporting For Good.

Covid-19 is having a devastating global impact on aspects of lives and businesses, Canadian  charities and non-profit organizations have also been hit hard. This sector faces irreparable collapse, massive layoffs and permanent closure which tragically impedes these organizations’ ability to support our countries most vulnerable populations. As part of our ongoing Brands Supporting For Good column which focuses on brands and organizations doing their part to help with the impacts of COVID-19 we have come across a new initiative from Pomp & Circumstance [TCO].

A coalition called The Emergency Coalition of Canadian Charities with over 170 charities was formed, spearheaded by Dr. Samantha Nutt, the founder of War Child, Participating charities included War Child, Canadian Cancer Society, UNICEF, Global Vision, Kids Help Phone and the United Way, among many others. 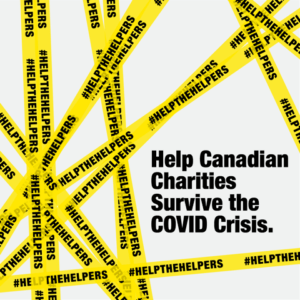 Together the charities formulated a stabilization fund which—if granted by the Federal Government of Canada—would prevent their collapse, protect their employees and the vulnerable populations they serve and launched a campaign. #HelptheHelpers requested the urgent support through a written letter to the Prime Minister, signed by the heads of 140 charities.

Pomp & Circumstance (P&C) offered its services pro bono to support the coalition in its campaign through a robust media relations effort. To help ignite the conversation on social media, P&C designed a graphic and hashtag to be the face of the campaign online. #helpthehelpers became the unified and trending message on social media as people offered their voice and support to the Coalition.

So far P&C  efforts have been able to garner over 57,000,000 media impressions, completely earned, and over 125 stories across broadcast, print and online media in less than seven days. Notable coverage includes CTV Power and Politics, CBC The National, BNN, Globe and Mail, Toronto Star and The National Post. With the early success and amount of coverage, a number of additional charities joined the campaign, jumping from 140 to over 210 signatures.