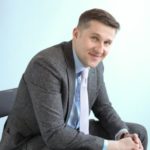 Wojtek Dabrowski has made it official, he has given his notice that he is stepping down from his role as Vice President, CEO Communications at Manulife. In the role Wojtek provided internal and external communications counsel to Manulife’s President and CEO since November 2015.
Prior to this he was RBC in the role of Director, Executive Communications; and before that Director, Communications — Personal & Commercial Banking. He has as been with TD as Senior Manager, Corporate Communications (TD Wealth Management and TD Securities); and Manager, Corporate Communications (Corporate Operations).
With over six years of financial public relations experience, and a decade as a journalism with such organizations as Financial Post, Reuters, and The Canadian Press) before that what is next for Wojtek? Stay tuned, we’ll have an update for you shortly.