Hudson’s Bay Gets You Ready For National Red Mitten Day 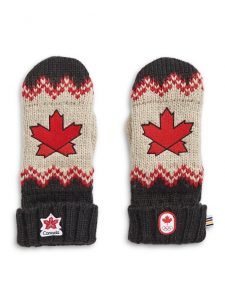 Are you ready for it? November 21st is National Red Mitten Day, and Canadian-retailer Hudson’s Bay [TCO] is back for the third year to help encourages Canadians across the country to show their pride and support for Team Canada. As part of the campaign, a portion of the sales from these limited edition mittens goes to the Canadian Olympic Foundation, the official charitable organization of the Canadian Olympic Committee and Team Canada.

The now iconic Hudson’s Bay Red Mittens captured the hearts of Canadians across the country when they first launched ahead of the Vancouver 2010 Olympic Winter Games. A symbol of Canadian pride and unity, the mittens have raised more than $32 million for the Canadian Olympic Foundation, helping Canada’s athletes access the best resources to achieve their Olympic dreams. Since 2009, the Red Mittens program has contributed to the success of Team Canada winning over 40 gold medals.

“Hudson’s Bay’s Red Mittens have made a tremendous impact as a part of our mission to help this country’s athletes live out their dreams on the world stage and inspire a nation,” said Wayne Drummond, Chief Merchant, Hudson’s Bay. “Red Mitten Day is a day for Canadians to show their true Canadian spirit and continue to help raise much-needed funds as we look ahead to Tokyo 2020 and beyond.”

In addition, 2019 marks the official 10-year anniversary of the launch of the first Red Mittens ahead of the Vancouver 2010 Olympic Winter Games. To mark the occasion, a new limited edition commemorative mitten will be available at the Vancouver Downtown Hudson’s Bay store and on thebay.com.

DAZN Canada teams up with Dan Marino ahead of Super Bowl LIVJanuary 29, 2020
Interac and Heart And Stroke Foundation Team Up To “Activate” CanadiansJanuary 29, 2020
GoDaddy Scores Another Free Throw With Muggsy Bogues’s “Book Deal”January 27, 2020
Sure There Is The SuperBowl, But Rethink Breast Cancer’s Booby Bowl Is A Game ChangerJanuary 24, 2020
Forget The Winter Blues, 7-Eleven CanadaJanuary 22, 2020
Your organization needs the best talent, let The Connected One help you!