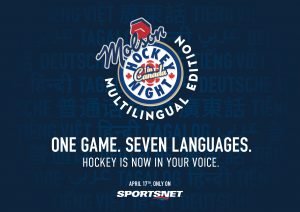 On April 17, 2021, Molson Canadian [TCO] and Sportsnet are inviting more Canadians to experience our nation’s game of hockey like you’ve never heard it before.  The game will be streamed in 7 additional languages beyond English, French and Punjabi, and will include Cantonese, Mandarin, Hindi, Vietnamese, Tagalog, German, and Arabic, exposing millions more Canadians to the game in an accessible and inclusive way.

With hockey being a national sport that resonates with Canadians it is part of the culture, tradition and identity when you think of being Canadian. For the approximately 350,000 people who are new to Canada each year, hockey can be a way to forge new connections with their communities and unite them with their new home – but, following a fast-paced sport with a lingo of its own sure can be challenging at first. So for first time in Saturday night hockey tradition, Molson Canadian in partnership with Sportsnet will be presenting Hockey Night in Canada in 7 additional languages.

“Canada is among the most multicultural nations in the world, and what an incredible thing it could be to intersect the pride we have in our country’s game with the pride we have in the diversity of its people,” said Joy Ghosh, Senior Brand Director for the Molson family of brands. “As Canada’s oldest brewery, connecting people over a beer for 235 years and being a decades-long supporter of hockey, we’re excited to make something so special happen on April 17.”

The 7 languages selected are the most commonly spoken in each Canadian city with an associated NHL team and represent the mosaic of current and prospective hockey fans coast to coast; this multilingual edition therefore extends a wide and warm welcome to Canada’s unofficial national sport so more people can see what the passion is all about.