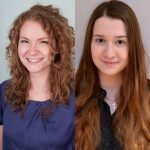 As they start off 2020, Toronto-based TARO PR [TCO] is celebrating as a number of clients have indicated they are renewing their business relations with the agency.  With this continued growth the agency has announced to PR In Canada they are promoting some of their staff.

Brianna Hurley has been promoted to Senior Director of Publicity and will now responsible for various studio and independent client strategies, International film festivals, set publicity and overseeing a variety of teams for the execution of targeted marketing and publicity campaigns.  Previously she was Publicity Director at the agency.

Mariia Novok has been promoted to Publicist. In her new role, Mariia and her team will be responsible for strategies and execution for the nationwide promotions of Elevation Pictures amongst other campaigns.