Flying High On Their Success, Swoop Launches Campaign To Celebrate Its Two-Millionth Traveller 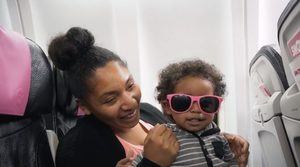 Over weekend, Swoop (a subsidiary of WestJet) celebrated its two millionth traveller since its first flight took off in June 2018. To commemorate this milestone achievement, Swoop presented an unsuspecting guest with a round-trip flight to anywhere Swoop flies. The lucky traveller, Travis Pickering, was surprised by Swoop on-board a flight from Edmonton International Airport (EIA) to McCarran International Airport with his wife and two children.

“Reaching this milestone of having flown two million travellers in this short timeframe affirms the need for Canadians to have affordable air travel options,” said Shane Workman, Head of Flight Operations, Swoop. “Swoop is humbled for the opportunity to be part of so many Canadians’ travel plans. Whether they were travelling to visit family, take a vacation or for business, we are honoured that Swoop has been the airline of choice for two million travellers.” 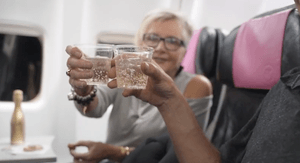 As part of the celebrations, Swoop also provided all travellers on the flight from Edmonton to Las Vegas with cookies, champagne and some fun Swoop swag.

The airline now travels to 20 destinations throughout Canada, the U.S., Mexico and the Caribbean. Swoop also has plans for additional fleet and service to more destinations in 2020.