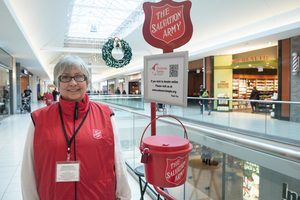 With a national $21.6 million fundraising goal, the Christmas Kettle Campaign enables local Salvation Army units to provide practical assistance to individuals and families in 400 communities across Canada. Every donation to a Christmas kettle remains in the community in which it was given, in order to help local people in need.

“The Salvation Army believes that everyone needs an army and that people need to know they are not alone in their struggles,” says Lt-Colonel John P. Murray, territorial secretary for communications. “For more than 135 years, and through the generosity of our donors and volunteers, the Army has restored hope and dignity to hundreds of thousands of Canadians.”

Hosted at more than 2,000 locations across Canada, the annual Christmas Kettle Campaign would not be possible without the thousands of kettle workers who volunteer their time.  Last year, The Salvation Army helped over 1.6 million people, providing 3.4 million free meals, assisting 261,000 with Christmas food hampers and toys and over 1.1 million with food, clothing or practical help.

Beyond donating to The Salvation Army’s physical Christmas kettles, people can also use FilltheKettle.com a Salvation Army mobile site to make donations.