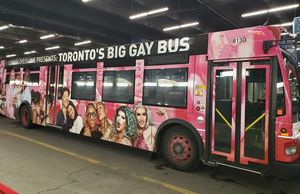 Hall+Co. [TCO] has signed a new Pro Bono partnership with philanthropist Kathryn E Langley Hope’s BIG GAY BUS initiative.   The bus was born in June 2019 with collaboration and creative direction from LoveisLoveisLove campaign Founder and Director, Adam Zivo. LoveisLoveisLove is a Toronto Based LGBTQ+ advocacy campaign that was founded in response to the Orlando Pulse Shootings in 2016.

Hall will play a key role with the messaging strategy, media relation and other public relations efforts.  Toronto’s BIG GAY BUS was founded and funded by Kathryn E Langley Hope, a local philanthropist, Rotarian, professional nurse and Vice-Chair of the NATO Association of Canada.