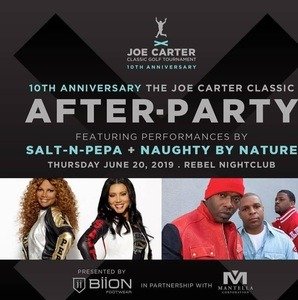 For the 10th year in a row Joe Carter and his team behind the Joe Carter Classic hit the ball out of the bark with their multi-day charity efforts. Each year a two-day celebration is hosted in support of children’s charities that attracted various from entertainment and sports to come support the cause. This year brought special performances by Salt-N-Pepa and Naughty by Nature, something every classic 90’s hip hop lover enjoyed.

The Joe Carter Classic Celebrity Golf Tournament finished off its 10th annual charity event with a two-day skins game and golf tournament, ending in a high-spirited party at REBEL Entertainment Complex in Toronto. Baseball superstar Joe Carter led the party along with notable guests, such as Dan Marino, Barry Larkin and Jesse Barfield, to cap off this year’s highly successful program.

The event attracts corporate Canada as well, this year saw the event sponsored by BIION Footwear in partnership with Mantella Corporation. Also attracting other brands such as BlackBerry, TD Bank Group, Canada Goose and Callaway.

◄1234►
Photo Credit: George Pimentel
In the one decade since its inauguration, the Joe Carter Classic Golf Tournament has raised over $2.5 million benefiting the Children’s Aid Foundation’s Joe Carter Family Support Fund and the Joe Carter Scholarship Endowment Fund, along with other local children’s charities.