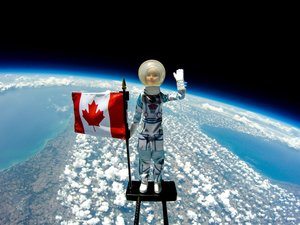 This year the Barbie brand celebrates it’s 60th anniversary and a number of initiatives are set to mark this major milestone. One of these includes a campaign that occurred on Friday, July 5, in London, Ontario where a Barbie Astronaut Doll was used to engage and encourage your girls to get into STEM programs.  Barbie also made an appearance and was sent for a rise high above in a weather balloon as she soared into the clouds.

The event was held in partnership with Canadian not-for-profit STEM Camp, campers experienced space-related programming and counted down Barbie’s launch to space on a high-altitude weather balloon. Her three-hour journey to space and back was captured on live action camera.


“STEM is all about science, exploration and discovery. We were so excited to send Barbie to space, so kids could learn the science and technology behind making this magic happen,” explained Lisa Perry, Barbie Brand Manager at Mattel Canada. “For the first time, Barbie went to space and we hope this inspires a new generation of girls who will pursue STEM careers.”

In addition, young girls were given the opportunity to hear directly from a successful female role model, Aerospace Engineer, Natalie Panek, who offered her insight into a career in aerospace engineering and how she continues to pursue her dream of exploring space. Natalie is a rocket scientist, explorer and champion for women in STEM. Natalie’s dreams began at a young age with Barbie by her side to spark her imagination.  As we mentioned there are a number of activations that will be executed over 2019 as part of the brand’s #YouCanBeAnything

Fashion Santa Returns With More Holiday Joy At The Ritz-Carlton