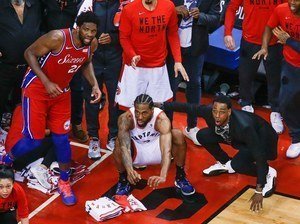 There is no doubt that the star of the Toronto Raptors  is Kawhi Leonard.  He is a quite man who has let his actions on the court speak for him. Three-point shots, free throws, and game clinching shots like in the image to the right have turned Kawhi into a fan favourite.   As a brand he is everywhere, he is the story of many headlines, water cool conversations, memes on social media and his on court performance has turned many Torontonians into fans of basketball, or at least their home town team – Toronto Raptors. 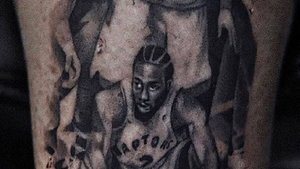 Philadelphia 76ers in the NBA’s Eastern Conference semifinals.  It looks like everyone wants to be part of the Kawhi Leonard brand unfortunately Nike made a big misstep.  One Monday Kawhi Leonard filed a lawsuit against Nike alleging the brand filed a copyright of a logo he originally created without his permission, and did not inform him.  From October 2011 until September 2014 Kawhi was in a sponsorship agreement with Nike.  He now has a sponsorship deal with competitor New Balance and wants to use his “Klaw” logo “on clothing lines, footwear and other products, as well in connection with sports camps and charity functions.  Nike famously says it does not comment on pending litigation so no word from their camp.  This will ultimately come down to details, the details listed in the contract between Nike and Kawhi Leonard but the public relations perception from the headlines is a loss for Nike.

Unfortunately for Nike this is not their first basketball related misstep during 2019.

Is Basketball bad for Nike?

At 6′ 6″ and weighing 280 lbs, Duke University Zion Williamson has become a superstar at only 18 years old so it was major news not just in the sports world when during a game against arch-rival North Carolina Feb. 20. headlines were made.  During that game while making a run for the basket Zion’s shoe simple crumbled (see video below). Unfortunately at the time he was wearing a pair of Nike shoes and resulted into Zion falling to the ground with a knee sprain.https://youtu.be/LqJUgQAyDMo