News outlets, water coolers and social media accounts around the world have been buzzing about Nike’s new ad that features Colin Kaepernick with the following caption:

“Believe in something. Even if it means sacraficing everything.” 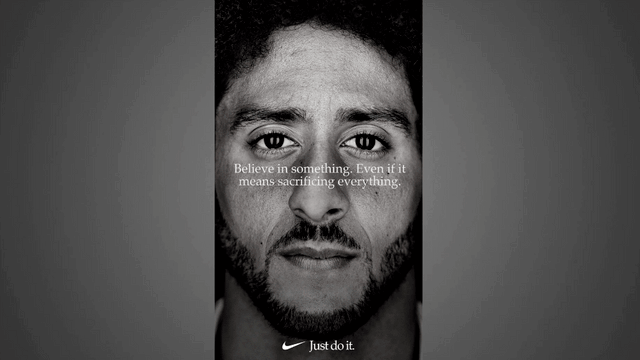 There is no question this was a very bold move on the part of Nike who is currently under a 8 year agreement with the NFL to provide all 32 teams with game-day uniforms and sideline apparel.  Kaepernick is the player behind the movement to take a knee during the national anthem in protest of oppression towards people of colour in the United States and the ongoing issues with police brutality.   He is not the first person in history (Ghandi, Muhammad Ali, Erica Chenoweth and Jeremy Pressman have all been behind public protest movements) to take such a bold stance however who his actions have drawn so much attention due to how he essentially defied – NFL owners (or people with large bank accounts. Media has and continues to weigh in on the topic, #45 has jumped to his Twitter account to label Kaepernick as unpatriotic, but that has not stopped others from following his actions.

In many ways we can draw similarities of Kaepernick’s actions to the story of David and Goliath.  It is almost impossible not to have heard or seen someone discussing Nike’s ad, but what is actually happening?  Let’s take a look at the Good, the Bad, and the Ulgy.

The Good part of the Colin Kaepernick / Nike ad:

If the goal of advertising is to get people talking about your company – mission accomplished. If it is to get people buying your product – too soon to tell, the campaign was only released this week.

The Bad part of the Colin Kaepernick protest:

The Ugly part of the Colin Kaepernick protest:

Racism, bigotry, hatred over ethnic background, sexual orientation In 2018 it is all still alive and unfortunately there aren’t enough signs we see it will go away anytime soon

Do you remember why Kaepernick started the protest?  Unfortunately the majority of conversations about the ad are solely around the ad and Nike.  The initial reason that Colin Kaepernick started his quiet protest has been silenced by the Nike ad.  It is great that Nike is trying to do something to help fight social injustice.  Perhaps a portion of their revenue as a result of the campaign can be used to fix the problem.