Let’s get started with our third edition of Backlash Of Brands, where we take a look at which brands are currently faced with a crisis management issue, or having a “opps” moment that is making headlines.  In this edition we will take a look at KFC, National Rifle Association (NRA) and Snapchat.

#BoycottNRA – NRA Shoots Itself In The Foot

Survivors of the mass shooting at Marjory Stoneman Douglas High School in Parkland, Florida, have been passionately urging big corporations to cut their ties with the National Rifle Association (NRA).  Like many associations the NRA promotes member discounts as a selling point to drive member signups.  The NRA has bee also been met petitions from hundreds of people camped outside of their Virginia headquarters over the last week.

Enterprise, Alamo, and National, and First National Bank of Omaha announced the ending of their partnerships with the NRA, signaling a new phase in the movement for gun control since the Parkland, Florida shooting.  Other organizations include Avis, Budget, and Hertz; TrueCar, Symantec, MetLife, Chubb, SimpliSafe, Teladoc, Starkey Hearing Technologies, Delta, United, Allied Van Lines, North American Van Line, FedEx and the list will continue to grow.

The hashtag #BoycottNRA has also been trending on social media to support the movement.

Although they were partying with Drake to ring in the New Year, Snapchat has been in hot water from its users base ever since due to the social media app’s redesign.  Users have been complaining about the latest redesign of the app but it took a major turning point last week with just one tweet:


sooo does anyone else not open Snapchat anymore? Or is it just me… ugh this is so sad.

This is definitely not good news for the brand as Kylie has over 1 million followers on her Twitter account and media outlets around the globe have created stories about Snapchat’s future. It also shows that Snapchat continues to ignore its user base who demanded the app make better improvements to its design, and over 1.2 million people have signed a petition on Change.org asking Snapchat to remove the redesign.
However, the damage to Snapchat’s brand did not end there, as a result of the Kardashian’s tweet, last Thursday Snap (SNAP) stock closed down 6%, which drove the stock down $1.3 billion off the company’s market value.

Restaurant chain KFC had a global blow to its brand last week as they faced a shortage on poultry which resulted in KFC closing stories across the United Kingdom and Ireland and a slew of jokes across social media, and the birth of a hashtag – #KFCCrisis. When your company sells one product, specifically “chicken” and you run out it becomes a major crisis immediately, the chain closed 900 stores and blamed it on their logistics partner DHL who also apologized for their part in the problem.

When all you serve is fried chicken—you had better not run out of chicken.  KFC’s public relations team was quick to respond and put out a full page tongue-in-cheek ad: 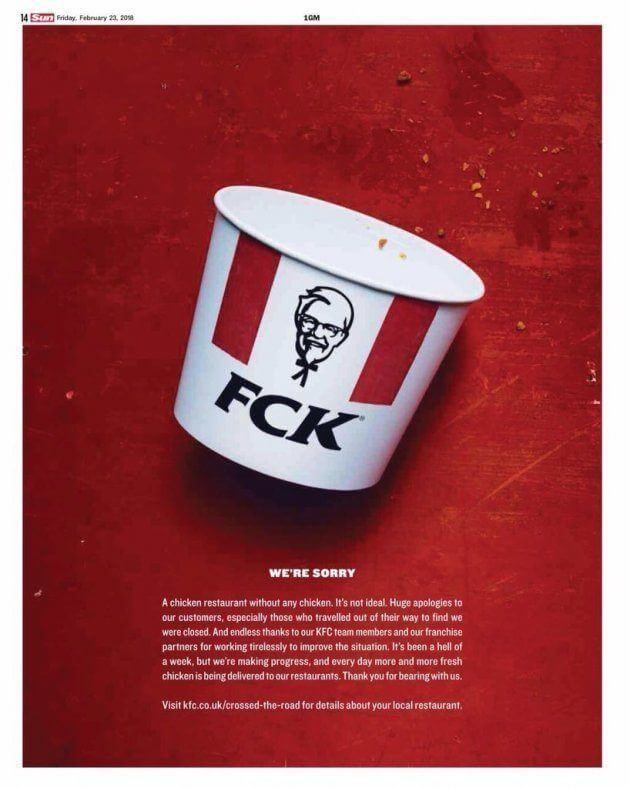 Instead of “KFC” the bucket had the letters “FKC” on it and a message saying:

“A chicken restaurant without any chicken. It’s not ideal,” the ad says, stating the obvious.

“Huge apologies to our customers, especially those who travelled out their way to find we were closed.”

Someone also caught this cute little girl and her remarks.

What Happened on Social Media in 2019 [Infographic]

Is Influencer Fraud Hurting Your Brand? Study Predicts Will Reach $1.3B By 2020