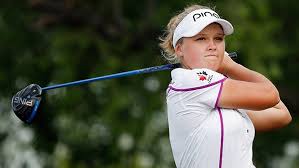 As Canada’s largest retailer for golf gear and apparel gets ready for the 2017 season Golf Town announced a three year endorsement deal with LPGA Canadian professional golfer Brooke Henderson.   At 19 years old Brooke is currently ranked number 8 in the world, she has quickly risen to prominence in 2016 with fifteen top 10 finishes, and three LPGA Tour victories including her first major; the KPMG Women’s PGA Championship.

This is the first time that Golf Town has worked sponsored an athlete to work with the brand.