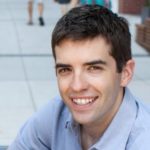 Sean Lewis has joined Halifax-based Irving Shipbuilding as the shipbuilding and repair organization’s new Director of Communications.  In the role Sean will be responsible for all strategy and execution of the company’s communications.

Fun Facts: Prior to entering public relations, Sean was a crew member on the Bluenose II, Nova Scotia’s sailing ambassador and the ship on Canada’s dime.