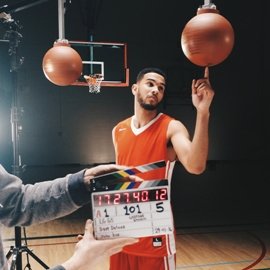 Born in Toronto, and now playing in the position of point guard for the Toronto Raptor’s Cory Joseph is a playmaker on the court. Now LG has turned to Cory and appointed him the “Chief Playmaker” off the court as LG’s new Ambassador for their much anticipated LG G5 smartphone.

As part of the new partnership, Cory will spread his love of the device through a series of marketing and advertising initiatives through the 2016-2017 season.

The LG G5 is the company’s first ever modular smartphone featuring a range of companion devices, one of which that instantly transform it into a digital camera with a real camera-like grip. The G5 also features the industry’s only extreme wide angle lens, a DSLR-like manual mode and more. Plus, the added ability to swap out a depleted battery for a fully charged one in seconds, means users are never without power.

As part of his Canadian LG G5 ambassadorship, Joseph will appear in LG ads that may include TV, radio, print, out-of-home, point of sale and digital advertising. He will also participate in social media integrations and personal appearances.