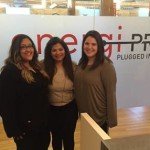 Montreal-based energi PR has hired some new talent to add to their team in Toronto with the addition of Somya Dixit, Marybeth De Santos, and Mira Zunder .

Somya Dixit Anand joins energi PR as Group Manager. Previously Somya was an Account Manager at Edelman where she worked on key accounts in hospitality, retail and consumer goods.    Before that she was a member of the McDonald’s Corporate Communication team.

Marybeth De Santos has been hired as as Account Coordinator, Health and Wellness. Marybeth received her BA Honours with a double major in Communication Studies and Anthropology from York University, and her Public Relations certificate from Humber College.