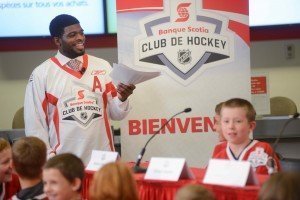 As Canada gets ready for its one of its most celebrated “unofficial” seasons – hockey, Scotiabank recently announced its newest Hockey Ambassador, NHL Star P.K. Subban.

The announcement was made this week atScotiabank’s Brossard Branch in Quebec, when P.K. surprised the NDG Atom Panthers by showing up while they visited their sponsored branch.

Originally from Toronto, ON, P.K. grew up playing community hockey in the GTHL and is now a star player for the Montreal Canadiens, a Scotiabank-sponsored team for the past five years.

“Growing up playing in the Canadian minor hockey program, I’m drawn to the way that Scotiabank’s sponsorship of hockey spans all aspects of the game,” said P.K. Subban, Montreal Canadiens all-star defenceman. “The team at Scotiabank recognizes that hockey has the power to connect communities and people across the country.” 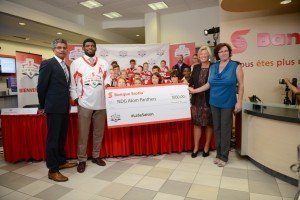 As part of the engagement with Scotiabank P.K. will:

“We believe it’s important to build teamwork and camaraderie in sport and community,” said Clinton Braganza, Senior Vice President, Canadian Marketing at Scotiabank. “Hockey is a shared passion for our customers and employees and it’s an important part of our community and sponsorship strategy. With P.K. as our new Community Hockey Ambassador, we have someone who embodies those same values, and understands the importance of Canada’s unofficial 5th Season – the hockey season – has on our lives in Canada.”

Are You The Next Top Avochef? Avocados From Mexico Contest Now Open

Toronto, Are You Ready For Your Heineken Fresh Looks