A&W Joins The Fight At MS Day In Quebec

For the past six years, 6.5 million dollars have been raised through public involvement to help the fight against, multiple sclerosis but it is not enough as millions of Canadians still suffer from the disease.  The Multiple Sclerosis (MS) Society of Canada invites Quebecers to contribute to its annual fundraising and MS awareness campaign, which has been held for the past seven years in collaboration with A&W Food Services of Canada Inc. On August 27, $1 will be given to the MS Society for every Teen Burger sold in Canada from participating A&W restaurants. 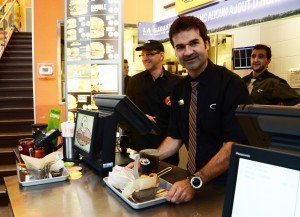 “Multiple sclerosis is an illness that affects nearly 100,000 Canadians, including about 20,000 Quebecers, said Louis Adam, Executive Director, MS Society, Quebec Division. A&W’s Cruisin’ to End MS Day is a 24-hour national campaign that helps raise funds for multiple sclerosis research and services provided to those suffering from this disease in Québec. On Thursday, August 27, I invite Quebecers to visit any A&W location across the province to help those who live with this illness every day!”

In 2015, the MS Society, in collaboration with the MS Scientific Research Foundation, awarded a $4.2 million grant for a clinical trial called MESCAMS. This innovative international research project, exclusively focused on treating MS by mesenchymal stem cells, is the first of its kind in Canada and already looks promising!

The grant given to the MESCAMS clinical trial is co-financed by proud backers, including A&W Food Services of Canada, who donated a million dollars. A&W has given a total of $6.5 million to help those suffering from multiple sclerosis since the launch of A&W’s Cruising to End MS Day.