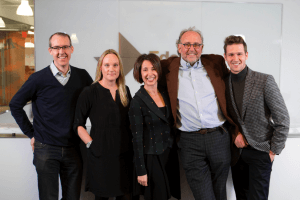 Some significant changes were just announced at Edelman Canada at the highest level of the organization.

John Clinton, CEO, Canada has been promoted to Chair and CEO, Canada, North American Head of Creative and Content. John originally joined the firm in 2011.  In his capacity as Canadian Chair and CEO, Clinton will continue to be involved in significant new and key client business efforts and will set the company direction and long-term vision for Canada.

Lisa Kimmel, General Manager of Edelman Toronto will now take on the role as President, Edelman Canada. Since becoming General Manager in 2009, the Toronto office’s revenue has grown 65 per cent and profit has more than doubled. She will also take responsibility for Canadian strategy development and execution and will drive new business efforts for the agency on a national basis.

Scott Evans has been named the General Manager, Edelman Toronto, previously he was Co-Deputy General Manager of Edelman Toronto and National Sector Leader, Health.
Since joining Edelman in 2006, Evans has tripled the agency’s Health business in Canada, driving growth by greatly diversifying the sector’s client base and broadening the scope of work to include a number of specialty offerings. As general manager, Evans will be responsible for the continued strategic direction, growth and management of Edelman Toronto.

Jordan Doucette, Executive Creative Director, Toronto will now take on the role of National Executive Creative Director. Jordan was hired in March 2014 and in her short time with the firm she has led bold, engaging and business-changing campaigns for clients. In her new role, Jordan will continue to scale the firm’s creative capabilities on a national level, delivering leading-edge work across geographies.

Tristan Roy, Managing Director, Digital moves to Managing Director, Digital and National Specialties. In addition to continuing to provide oversight to the firm’s digital, paid media and measurement & insights specialties, Tristan will now play a leading role in operationalizing other specialty areas such as planning and creative across all four Canadian offices. He will continue to oversee Digital clients, and all new digital business opportunities.