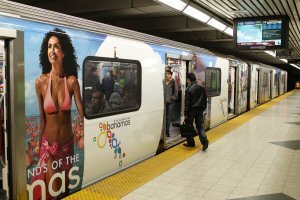 Bahamas Tourism, with media planning provided by VMC Media, is the first advertiser to wrap the six-car fixed configuration Toronto Rocket subway train, with creative graphics spread across a total length of 435 feet. The Toronto Rocket is the newest model of subway trains on the TTC system and this wrapped train will run exclusively on the Yonge-University-Spadina line. The campaign creative continues on the inside and includes a combination of Super Interior Posters, Standard Interior Posters (horizontal signage positioned above passenger seats), and Vertical Door Cards (vertical signage positioned on either side of the subway doors).

“As the exclusive supplier of advertising for the Toronto Transit Commission, PATTISON Outdoor Advertising is proud to reveal this incredibly engaging campaign for the first time on the TTC’s newest model of subway trains,” says Bob Leroux, Vice-President and General Manager, Central Region, PATTISON Outdoor Advertising. “Bahamas Tourism has chosen an extremely effective way to communicate the warm hospitality and colourful culture of the Bahamas. Hundreds of thousands of riders will experience this great creative. This is sure to be a very impactful and successful campaign.”

The Bahamas’ Minister of Tourism and members of his executive team will soon visit Toronto to host a media launch promoting tourism in The Bahamas and their 2013/14 fall and winter marketing campaign in Canada.