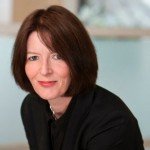 As CBC continues to make its way throughout several senior departures over the last six months such as here and here, they have recently that former CEO of Edelman Canada Heather Conway has now joined the Canadian Broadcasting Corporation (CBC).  In the new role, Heather has been named CBC’s Head of CBC’s English Services and will oversee English-language TV, radio and online services at the cost-cutting public broadcaster.
Previously Heather was the Chief Business Officer at the Art Gallery of Ontario, and CEO of Edelman before that.