Tim Hortons RRRoll Up the Rim to Win Returns, But Would You Share The Winnings? 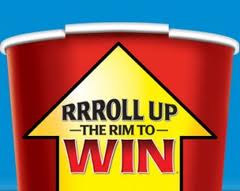 According to the RRRoll Up the Rim to Win Etiquette Poll, two-thirds (65%) of Canadians said they would keep the car if treated to the winning coffee by a friend, ut not all is lost. The survey also revealed that among those winners who would keep the car, 73 per cent would treat their friend to a special gift in return for the car (and, hopefully, throw in an occasional ride).

“It’s a Canadian tradition to treat friends to Tim Hortons coffee and with millions of prizes available, there is a chance that coffee rolls up to something more,” says Dana Brochu, Category Brand Director, Coffee and Tea, Tim Hortons. “Our survey showed that etiquette varies depending on the nature of the prize, but the vast majority of Canadians indicated some reciprocation is in order.”

The poll also reveals that nearly six-in-ten Canadians would share the $100 Tim Card and $5,000 MasterCard® prepaid cards  with their friend, if that friend treated them to the winning coffee.  Coffee and donuts were the prizes most likely to be gifted back to the purchaser (33% and 32%).