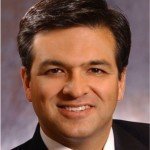 Over the last year, Hill+Knowlton (H+K) Strategies has made a significant number of moves to the public relations agency, they completed a corporate re-brand, expanded their digital team, and made a number of new hires in Western Canada, and also a lot of effort re-building their Ottawa office as we reported here , here.  Of course the question in the back of many people’s mind was – what’s going on at Hill+Knowlton Strategies?

Our question has just been answered as they have announced that Goldy Hyder, currently General Manager of H+K’s Ottawa office, has been promoted to President.  Mike Coates, currently President and CEO, remains CEO but also becomes Chairman of the company. In addition, he recently assumed oversight responsibility for Hill+Knowlton Strategies Australia and will continue to take on special projects on a global basis.   Goldy Hyder will have six General Managers reporting to him, and he in turn report to Mike Coates.

Earlier this year, Goldy oversaw the acquisition of Ascentum Inc., a public engagement specialist firm, into the Ottawa operations. Goldy, a native Albertan, served as the Rt. Honourable Joe Clark’s chief of staff prior to joining Hill+Knowlton in 2001.