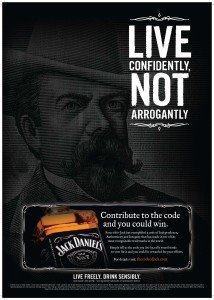 The Hive and Brown-Forman Canada have launched a national integrated promotional program to encourage consumers to submit the personal code that they ‘live by’.

Living up to the legendary Jack Daniel himself who lived by a certain code – reflected in his personal life as well as the process behind his trademark Tennessee whiskey – Brown-Forman and The Hive have an integrated in-bar and online promotional program, asking consumers to join in the spirit and submit their own personal Code of Jack.

“With this contest promotion that they’ve developed, The Hive has done a great job of bridging the traditional independent spirit of the Jack Daniel’s brand with the inclusive, community focus of the social media phenomenon we all live under in today’s world,” says Brad Fletcher, Managing Director of Brown-Forman Canada.

“The Code of Jack promotion is really a perfect blend of the old and the new, resulting in a completely fresh and innovative brand activation program for Jack Daniel’s,” says Rick Shaver, Vice-President of The Hive, which has represented the Jack Daniel’s brand since 1998 and, under the auspices of BF Canada Powered by The Hive, acts as Brown-Forman’s exclusive product distribution, sales and marketing partner in Canada.

The first stage of the Code of Jack contest is to have a brand panel review and select the top 20 codes from all national entries posted to the contest website (www.thecodeofjack.com). The online community will then vote for their favorite code to win. The entrant who earns the most votes will win a trip for two to Lynchburg, Tenn., home of the Jack Daniel’s distillery.

The promotion launched October 5th in 70 on-premise activations in 10 major urban markets across Canada, including Vancouver, Calgary, Toronto, Montreal and Quebec City. The contest runs until the end of October.

Participating bars will also have a team of Jack Daniel’s brand representatives on site, will organize a series of scheduled in-bar events at which consumers will be directly engaged and encouraged to enter the Code of Jack contest, as well as to visit the Jack Daniel’s global Facebook page where they can “tag” themselves in any event photos and stay in touch with the brand. The promotional team will have an iPad on-site to facilitate contest entry.

I Am Andrea Anders And This Is My Origin Story