Advertising In Schools, Is This The Next Frontier? 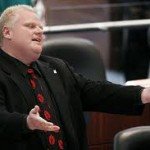 Mayor of Toronto, Rob Ford is making the news yet again, this time it is for comments he made on a radio station Fan 590 last week.  He commented to say, “”ridiculous that school gymnasiums sit empty when they could be generating revenue.”  On one hand he is right as it is a way to offset the costs associated to run a school and tax dollars.  However one could also argue that schools are a place for education and they should not be covered in “Special deal, click here” ads.
If between selling ads on the TTC and in public schools, it brings down the amount of money that you pay in taxes per year to live within the City of Toronto, would you not vote for that? Weigh in below with you comments or simply click to vote yes or now below: