As they look expand their integrated brand agency, Toronto-based Espresso has announced a new partnership with Brazilian-based Moma Propaganda and industry veteran Richard Reisfeld to launch operations in São Paulo.

“As an agency that focuses on building integrated brands, Espresso was seeking new geographies in which to introduce its offering,” says Espresso CEO Jacquelyn Cyr. “The Brazilian market was of particular interest to us given its economic performance and industry opportunities. After connecting with two of the city’s leading agency pros, Fico Meirelles and Richard Reisfeld, a partnership was formed to bring Espresso to Brazil.” 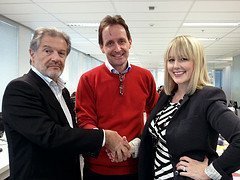 Moma Propaganda is an advertising agency  led by Fico Meirelles and Rodolfo Sampaio, with clients that include Kia Motors, Campari/Sagatiba, DuPont/Armura, Lacoste, and Sherwin Williams, Lycra/Invista, Syngenta, among others.

Espresso Brazil’s second partner, Richard Reisfeld, is a renowned marketing expert and businessman whose career highlights include account work at McCann, DPZ, Y&R, and co-founding DDB Brazil with OMNICOM and DPZ. Reisfeld will be overseeing the operations of the agency on a local level, with staff from Moma’s São Paulo office and Espresso’s Toronto office contributing to the efforts until complete staff is secured. Launch events in São Paulo and Toronto are planned for September of this year.