Scotiabank has been very active in 2010 with a number of corporate sponsorship initiatives across Canada and they have not stopped yet.  Their latest move is the acquired the naming rights to The Niagara Convention & Civic Centre (NCCC) which will open in April 2011.  The Scotiabank Convention Centre (SCC), located a mere 500 yards from the Canadian Horseshoe Falls, will draw hundreds of thousands of guests to the multi-purpose facility every year for a diverse range of events and corporate functions. The Centre will be the largest event and meeting facility of its kind in Niagara Falls and the Niagara Region. 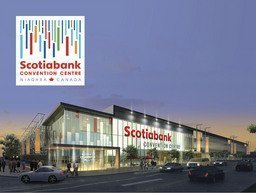 “This is an exciting new step in the evolution of the convention centre,” said Kerry Painter, President & General Manager, Scotiabank Convention Centre. “Our partnership with Scotiabank re-emphasizes the expectations and aspirations of not just the local community and the region, but also of the business sector on a national and international level. The Scotiabank Convention Centre is to be an innovator of unconventional experiences and a model for ‘green standards’. Scotiabank has continuously proven itself to be a community leader nationwide; and today, their investment in Niagara Falls demonstrates that one more time.”

“We are proud to announce our partnership with the NCCC and the naming of the Scotiabank Convention Centre,” said James McPhedran, Senior Vice President, Ontario Region, Scotiabank. “Scotiabank has been a part of the Niagara Falls community for more than fifty years and we know that the establishment of this vibrant, professional facility will enhance the region’s already strong tourist appeal and create economic spinoffs and new jobs. At the same time, we look forward to having a physical presence in the centre, giving us the opportunity to build on our service to the community.”

In addition to naming rights, Scotiabank will also have a 400 square foot branch and ABM located inside the facility, offering convenient service for visitors and the local community.