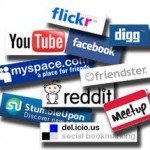 Market research firm Kelton Research conducted a study with 538 C-level executives, IT decision-makers and business unit leaders on their views, attitudes and adoption of social networking technologies earlier in the year. The executives represented a spectrum of organization from around the world and the study was commissioned by Avanade.

If You Integrate It, They Will Come, Social Media Is A Driving Of Business

While new platforms continue to enter the market such as the most recent media darling Foursquare, we have seen countless successes as businesses have integrated Facebook and Twitter. Another major change from past Avanade reports is the fact that apathy, fear and concern over productivity loss by employees has started to see a dramatic decrease by C-level executives. Social media tools have helped a number of organizations specifically in ways such as:

The Hype is Over

Another surprise with the finding is that the number of respondents who perceived benefits has dropped significantly since 2008. For example, only 34 percent see greater customer satisfaction from using social network technologies for business purposes, compared to 82 percent in 2008. Across all categories, results are similar. This follows a typical trend of new technology adoption, shown by Gartner’s hype cycle.
The results are evidence that companies are beginning to understand the business impact of social media technologies and are moving towards a more collaborative-based workforce. With greater integration of social media technologies in the enterprise, respondents are also becoming more realistic about the business value these tools can bring to their companies.
With senior management now on board, the opportunity for communications departments to weave collaboration and social media technologies into the fabric of the workplace much easier.

The Global Survey of Social Media in the Enterprise was conducted by Kelton Research, an independent research firm on behalf of Avanade, between February 8 and February 25, 2010. The 538 respondents include C-level executives (e.g. CEO, CFO, CIO, CTO), business unit leaders (GMs, heads of departments and functions, etc.) and IT decision-makers from 17 countries across North America, Europe and Asia Pacific.