Poll: Who should pay to clean up Toronto-base store from protesters attacks? 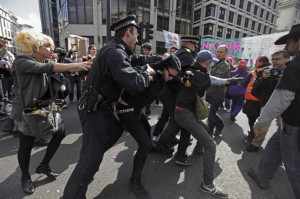 Police vehicles were burned, bank and other store windows smashed as protesters attacked the Toronto’s downtown leaving a wake of devastation.
To date there is no total cost of the damage.

“This is a federal responsibility. It’s their conference”, said Mayor David Miller

Foreign Affairs Minister Lawrence Cannon went on record prior to the start of the G20 summit to say the federal government isn’t legally bound to pay for any damages caused as a result of international meetings.

Some stores have commented they saw significant loss in sales during the G20, some noted as high as a 50 percent drop from the week prior.  Headlines are still very active with news stories daily from all sides involved in the summit and the now an a probe is being launch to investigate whether the police acted and did not violate civil rights of protestors.  Mayors from other cities within Canada have stated they are not in a hurry to host future G20 summits in their cities.   So what do you think, who should pay to clean up Toronto-based businesses?

Weekly Poll: What Is An Acceptable Amount Of Time To Respond To A Media Request?

Poll: Does Your Company Have A Social Media Policy?

Much like the Gulf spill, the economic damage one can assign to this economic conference so-called are … rather broad and sweeping. The moral costs … priceless.