We have always leveraged groups of family, friend to help us achieve a task, it could be as simple putting a call out and getting a couple of willing fiends to help you move.  Today on the Internet we call it “Croudsourcing,” and according to Wikipedia is defined as “Crowdsourcing is a neologistic compound of “crowd” and “outsourcing” for the act of outsourcing tasks, traditionally performed by an employee or contractor to a large group of people or community (a crowd), through an open call.” Ironic is that is how Wikipedia has grown to have well over 1 million entries on its site. 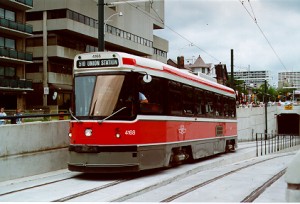 For months the TTC has had a horrible public image, but today is a new day and Canada’s largest transit system is taking several steps to improve the perception of their service such as the town hall they held last month.

This week ‘The Better Way’ has launched a new campaign inviting riders to complete a survey and offer the interior and exterior colour suggestions, proffer name suggestions and even volunteer to be part of future focus groups.  In total 204 streetcars will be added and replace older models throughout downtown Toronto by 2013. On the TTC’s website visitors can download a kit to get them started for those who wish to submit streetcars design ideas.  The new cars will carry 270 riders versus the 132 on the current models.

Your ideas can be submitted to ivr.ttc.ca/